The appalachian and near south region has given us great explorers like Daniel Boone, outspoken rebels like Mother Jones, and poets and singers like James Ageecoonie and Johnny Cash. The sturdy, sometimes fierce, and always loyal settlers of the Appalachia region scratched out a hardscrabble life on the edge of the frontier. For some today, that life still is. From these settlers has come the spirit of independence that has defined not only those of the region, but has permeated the very culture of this country. From these settlers came something else uniquely and genuinely "American"...the equally sturdy, spirited, and hardscrabble Coonhound.

These early settlers pulled off a great feat of breeding. They did more than create a dog able to hunt in the rough terrain of the wilds. They did more that create a dog skilled and willing to hunt game species unknown to the European hounds they had brought with them. They somehow imparted a part of themselves to the the dog they had made. Like these settlers, The Coonhound is an interesting, intelligent, and sturdy dog...but also dog fraught with quirky contradictions.

Someone once asked me what I mean by the Coonhound is a dog of "quirky contradictions. Think of the "hillbilly" shade tree mechanic you might find along some abandoned highway in the backwoods of nowhere. At the moment you meet him you are very aware that he is intelligent, highly skilled, and brimming with knowledge both practical and unusual...but when you leave you realize he has fixed your car with bubble gum and duct tape. The Coonhound is sort of like that...blessed with a unique intelligence...but prone to acts of outright silliness.

From those first dogs to be called "Coonhounds", the years have refined the breed into 6 different dogs. The Black and Tan, The Redbone, The Treeing Walker, The Bluetick, The English, and the Plott. Each of these dogs are a Coonhound and have [basically] been bred from the same source [with the exception of the Plott whose base bloodline is a German Bear Hound] ; but there are subtle differences in the behavior and bred purpose of each of these dogs. As an example, the RedBone was bred to be a good "swimmer". The Walker is generally thought of as the most "driven" as well as the "class clown". The Plott is often a more serious sort of dog. While all Coonhounds and possessing Coonhound talents, each of the six breeds has some specialization. As a person interested in a Coonhound for your family, these minute differences will likely mean very little to you. What you want to know is "What are these dogs like?"

Many people refer to the Coonhound as a "big Beagle". This is only partly true. While the Coonhound shares some of the Beagles traits, like being a generally cooperative and well mannered dog, these similarities are happenstance from breeding for similar purposes. ( IE: both Coonhounds and Beagles generally hunt in groups,many times with other dogs they do not know and have never met). They are as well scent hounds, so they typically follow their noses...but that is where the similarities end. The Coonhound is a different dog than the Beagle. If the Beagle can be described and a curious dog, the Coonhound should be called driven. The Beagle goes about its hunting task as much for fun and to satisfy its curious nature. The Coonhound is somewhat more serious in its demeanor. The Coonhound has more of a "working dog" temperament. This more serious manner of the Coonhound also makes them somewhat more trainable and more versatile in some tasks than the Beagle.

People who own a Coonhound will need an active sense of humor. This humor not only for the goofy things that a Coonhound will sometimes do, but also for the mischievous things they will sometimes do. Coonhound owners will also need a good skill for compromise. A Coonhound is more like having a spouse than a dog. Just like with a spouse or significant other where you have to sometimes give a little to get a little, compromise is a beneficial skill for a Coonhound family. If you are accustomed to or prefer a dog who easily and willingly follows commands, a Coonhound may be challenging for you. It is not that the Coonhound is disobedient or untrainable, more that they usually want to know "what is in it" for them. While this surely sounds like an intolerable trait for some, rest assured that, also like a spouse, they are a caring and involved dog who will share its life and love with you like few others.

Coonhounds are good with kids and make good family dogs. If I had to point to a failing in this regard it would be that the Coonhound is not always fully aware of their size. As a pet they are playful and interactive. Caution need be taken regarding young children who can get knocked down and run over. The Coonhound is typically very patient and cooperative with children and those that are not are viewed as problem dogs. So strong is the Coonhounds reputation as a good kid and family dog that dogs who do show intolerance are strongly frowned upon by most in the Hound community. The Coonhound is an affectionate and involved family member.

Coonhounds are not guilty of the famous stubborn streaks of the Basset and the Beagle. They are STILL NOT anxious to please as are breeds like Labradors or Shepard's. The Coonhounds, like all hounds, will show single minded focus and stubbornness when actively hunting or tracking quarry. It is the responsibility of owners to learn their dogs body language and recognize excitement levels to deter hunts before they begin if such behaviors are an issue. The most common challenge for owners is "nose deafness". Nose deafness is a slang terminology for the Hounds tendency to not listen when scenting. We say "the nose turns on and the brain turns off". Hounds are driven by their noses. It is their nature. This behavior should not be thought of as a problem behavior, but more the nature of the breed. If you are more accustomed to dogs who will leave behind interesting scents to respond to your commands , you might consider a different breed or dog.

We all too often hear people say that Coonhounds are not good with other pets and especially not good with cats. That is bunk. Whether or not a Coonhound is good with cats and other homebound creatures is entirely dependent on the individual dog and has NOTHING to do with the dog being a Coonhound. Truth told, we meet many Coonhounds who are fully aware that cats are FAST and full of POINTY things, and thus want nothing to do with them. With that said- there is a caveat. While by no means are all Coonhounds [or even most Coonhounds] bad with cats and other critters - when they are bad with cats and other critters - they are BAD with them. There is not much middle ground. The Coonhound is smart enough to make distinctions. As an example, a Coonhound can learn to live your pet cat in the house...but will hunt the neighbors outdoor cat.

Last but not least 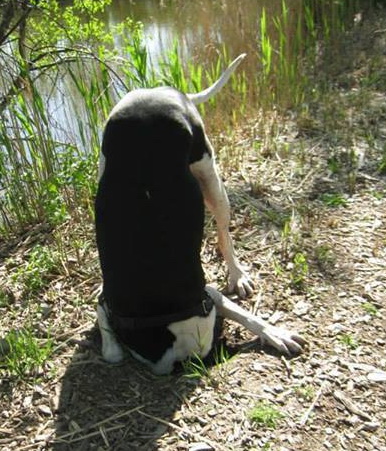