It is generally accepted that what we refer to as the "modern" Beagle, or the small compact hunting dog, originated in the hills and fields of ancient Britain and France. In the days of nobles and peasants, nobles had at their command nearly unlimited resources. These nobles kept packs of large hounds like Foxhounds, Talbot hounds and others. Lower Class nobles and peasants, lacking the resources to keep and maintain packs of large hounds but still needing a good strong hunting companion, developed smaller hounds. These smaller hounds were easier and cheaper to maintain. The name Beagle is believed to come from the Celtic word "beag", meaning small. The small agile hound quickly gained famed reputation. The Beagle proved to be a skilled and tenacious hunter and, in some ways, surpassing its larger cousins in the field.

The Beagle can be thought of as "the common mans dog". This is not an unfair assessment. The Beagle is truly a "blue collar" sort of dog. It would not be fair to say that they are "unrefined", but you will meet few other breeds of dog that so deeply enjoy their "dog-ness" as does the Beagle. The Beagle is a merry, easy going dog that loves family, especially children, and is prone to moments of mischievous clowning. Curious, intelligent, and mildly stubborn, that Beagle is renowned for both its antics and its affection.

WHAT WAS THE BEAGLE BRED FOR?

The Beagles was bred to hunt rabbit and hare. The Beagle is a dedicated hunter. Having a powerful nose, a strong sturdy body, and very good agility, the Beagle is perfectly suited for this task. The Beagles skill in the field has made it a favorite of American Sportsman. The breeding of the Beagle will also provide owners with some challenges. The Beagle (and Coonhound alike) were bred to be loosed at the field and to go out and hunt on their own without instruction from their handler. This contrasts dogs like the Labrador and other hunting breeds who, mostly, hunt by command. This "free-ranging" hunt style of the Beagle is the source of its occasional stubbornness.

WHAT IS THE PERSONALITY OF THE BEAGLE?

The Beagle was bred to work in a pack. Packs can consist of just a few dogs to as many as several dozen. Even those Beagles whom live and work with just one or two other dogs, if they are hunting dogs, will find it necessary to go into the field with numbers of dogs they have not met and do not know. This need has created a dog that is carefree and cooperative. The Beagle is generally merry and fun loving, preferring play and a good time to any sort of disagreement. The Beagle should be good with other animals, good with kids, non aggressive, and easy going. Beagles who show signs of intolerance or assertiveness are usually easily trained. Those whom are not easily trained are typically frowned upon by the hound community.

Beagles are generally quite good with kids. The Beagle has a fun and curious nature, much like many children. Truth be told, in some ways having a Beagle in your home is somewhat like having another child. They are inquisitive and playful and generally very cooperative with children but, like children, will need to be supervised. They can be mischievous and have a curious nature. Busy families with no time to dedicate to entertaining their Beagle may find him/her demanding of wanted attention. The Beagle wants to be a part of the family and take part in family activities.

PEOPLE SAY THE BEAGLE IS STUBBORN.

Well lets say that they are single minded - or focused. When choosing any breed, you need to consider how that dogs breeding might effect its behavior. Beagles are often referred to as stubborn and it is true that they are not always obedient. Obedience in a dog is most often thought of a responding to commands and direction given by a handler. If this is obedience, well perhaps the Beagle was bred to be disobedient. The Beagle and other hounds, unlike many sporting breeds, were not bred to hunt by following the commands of their handler. The Beagle was bred to be loosed in the field and go out, on its own, making decisions for itself, without interaction from a human handler. This has created a breed with a tendency to choose its own direction over following a handlers instruction. This is NOT a bad thing in a Beagle. This is as a Beagle should be. While this does make the Beagle occasionally difficult as a pet, it should be viewed as a necessary part of "Beagle-dom" rather than a bad habit that needs to be broken. BEAGLES CAN IN FACT BE TRAINED to be as obedient as any other breed, however, you will need to find creative motivations to train your Beagle beyond simply asking it to do as it is told.

Nearly all hounds will wander. It is true that the Beagle will wander off when unsupervised. The Beagles should be leashed ( or at least VERY closely supervised) at all times. They will dart and go roaming when the motivation strikes them to do so. This is however not a flaw in the breed. It is the nature of the breed. If having a dog that needs this sort of close supervision is not what you want in a dog, then I would suggest a different breed of dog. As mentioned above, the Beagles breeding means that the Beagle is somewhat of a free thinker. It is not that a Beagle cannot be trained to not wander off, because they can, HOWEVER. this training should never be completely relied upon and a watchful eye should be kept on the most well trained Beagle.

All dogs Bark. I will say of all the Beagles we have rescued, not a single one of them make as much noise as the Terriers across the street or the Pomeranian a few doors down. As with any breed, how much a dog barks is partly based on the individual and partly based on environment. I feel the reputation of the Beagle as being barky is more based in the "quality" of its voice as it is the "quantity" it uses that voice. For its size, the Beagle has a mighty voice. A Beagles voice is not only typically louder than other breeds its size, it carries a certain passion that other breeds do not share. We must also consider that many Beagles today, and in years past, are thought of as outside dogs and are kept outside, away from their people...which makes them bark. Beagles like to be where their people (or their pack) are. Outdoor Beagles can be noisy and this reputation has followed them into their life as indoor pets. As pets Beagles are generally no more or less noisy than any other breed.

Beagles are far from stupid. Truth is they are just smart enough to get away with not doing what you have asked them to do. People often base a dogs intelligence on its willingness and ability to follow spoken command. Following spoken commands says less about a dogs intelligence amid more about is willingness to please its handler. The Beagle is both curious and intuitive, though not motivated by the same things as other breeds. Where a Labrador is highly motivated to do whatever it takes to make its handler happy, the Beagles is somewhat more of a free thinker. Your pleasure with its actions is usually not the Beagles first concern. People whom say the Beagle is stupid likely never took the time to find what motivates their Beagle to respond. Beagles have profound problem solving ability. ..but they can do stupid things from time to time. 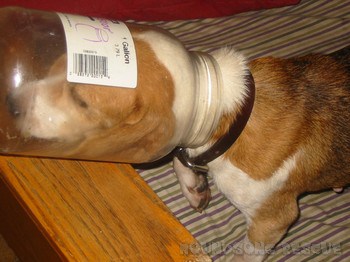